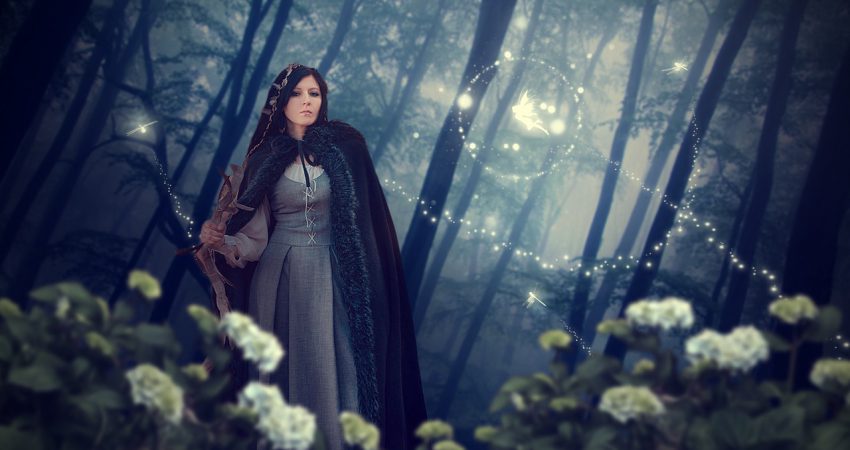 She scurried back to the bus as the rain began to fall. All day they’d been dodging rain showers…at Glencar waterfall, where legend tells Grainne O’Malley once bathed and here in the Hazelwood forest.

Secretly she wished the bus would break down. She didn’t want to leave. She wanted to sit by the lake close her eyes and feel the gentleness of the forest seep into her soul.

She settled in her seat and began to scroll through today’s photos. Much later she looked up. The bus was empty.

‘Is there a problem?’ she called to the driver.

‘The back door is broken. We’re waiting for a replacement bus. I did tell everyone.’  He looked at her through the rear-view mirror

‘Sorry, I was distracted.’ she said. ‘Something seems to be wrong with my camera.’

‘You’re in faery country. The likelihood of strange occurrences is high…broken door…broken camera.’

She said nothing, remembering her wish. She was on a tour, Sacred Ireland, land of myths, magic and fairies.

‘Your group’s down by the lake, under the trees,’ the driver added.

She wandered down to where they sat. Kathleen, their guide, was telling stories. She found a spot at the back of the group.

‘Where have you been?’ one of the girls whispered.

‘On the bus…there are strange spots on my photos.’ She handed the camera over.

They moved away from the group.

‘Yes, they aren’t spots. Orbs are proof fairies are about. When spirit orbs appear near a person or people, it’s a sign they are blessed with goodness and positive energy. I would say this group qualifies.’

‘These are beautiful. I’ve never seen so many. The fairies must have wanted you to know they were here. You must show Kathleen when she’s finished.’

‘Thank you…I’m going to sit over here and go through them all.’

‘Fairies like to lure pretty girls…give them to the Fairy King.’

‘Yep,’ she said in a disbelieving tone.

She wandered to the lakes edge. A gentle breeze caressed her face. Looking up she was surprised to see an ancient Oak tree in the shape of a dragon. Orbs, fairies, dragons she thought, this forest is a magical place.

She checked her phone for service and jumped on line.

FACT – ORBS have images and pictures inside them when you zoom in.

She found a photo with the most orbs, seven, small and large. She stretched the photo looking for what, she didn’t know. Her phone pinged. Her orb identifier was airdropping a photo. She accepted it. The photo was an image of her in the shadow of the old dragon tree, surrounded by orbs…big, small, rainbow coloured, perfectly round.

A sound startled her. It was the replacement bus. In an instant the forest breeze stopped, the birds went silent, a cold chill set in. The magic disappeared.