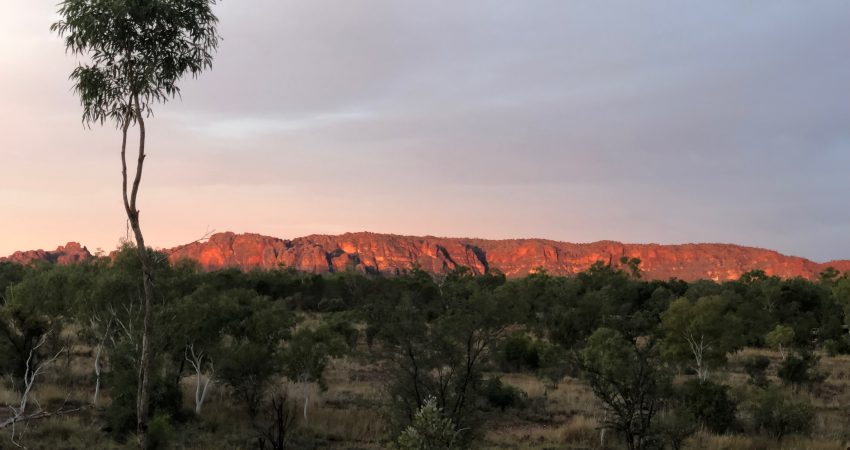 The land speaks. It is our duty to listen.

Our flight takes us east from Broome to Kununurra. Kununurra, established in 1961 to service the Ord River Scheme, is situated in the far north East Kimberley region of Western Australia. Kununurra is the English pronunciation of Goonoonoorrang the Miriwoong word for river.

At 6am we board a Cessna Caravan for our two-hour flight to Bellburn Airstrip, in the heart of Purnululu. Our flight takes us over the Ord River, Lake Argyle, Lissadell Station and Texas Downs Station the Osmand Ranges and finally over the stunning Bungle Bungle Beehives.

Agriculture was first mooted in the Ord river area in the late 19th century. It wasn’t until 1950 when construction of the Ord river dam began that the area became tropical agricultural farmland. The land is being used for a variety of agricultural crops, mango, citrus, watermelons, rockmelons, pumpkin, and chickpeas. Recently sandalwood trees were added.

Up until 1983 the Bungle Bungles was unknown to the outside world. While the aboriginals and pastoralists of the area knew of its existence, it was a film crew, filming a documentary, ‘Wonders of WA’, who showed this ancient wonder to the world.

Purnululu, which covers an area of 239723 hectares, comes from the Aboriginal Gija people, meaning ‘fretting sands.’ The Gija and the Jaru people have lived here for more than 20000 years.

From our aircraft, these beehive shaped towers, reflect orange, brown, black and earth tones in the early morning sun. Made of sandstone and conglomerates, they were deposited into the Red Basin 375 – 350 million years ago and eroded into their present form some 20 million years ago. These banded cone towers are unrivalled in their grandeur, anywhere in the world.

On arrival we were met by our guide Mick and transported to the lodge. After a quick breakfast we headed off in a four-wheel drive truck to begin our trek into Echidna Chasm. Joining us was Kolya of the Gija tribe, our out of country guide.

Echidna Chasm was laid down by a huge river system, one layer at a time, starting around 360 million years ago. While the walk in is approx 1.6km return, the terrain is rocky underfoot with areas that require climbing. The narrow gorge has 200-metre-high walls that reflect the ever-changing light in all shades of golden hues.

At the entrance to the Chasm are tall prehistoric Livistonia palms. The grandeur of the track, the colours, the spirit of the steep narrow gorges seem to demand silence. This is not a place for idle chat. The land lives. Its ancientness is felt at a cellular level. I shiver and hear the echoes of people past.

We return towards the carpark, taking a detour up to Osmand Lookout where we enjoy panoramic views of the surrounding ranges. The many varied hues of greens, blues and reds fill us with a peace rarely found in this world of uncertainty and tyranny.

The day is almost over. Dinner is served in an enclosed dining room; the flies are a pest here where the air is dry and dusty. They fly in your mouth, your eyes and up your nose. If you ever, ever go, you must take a fly net…the only means of peace from these wretches.

Day two and we are up early for breakfast. We climb back into the truck and head to the airstrip where we pick up another group. Today we are travelling to Cathedral Gorge and will be privy to close views of the beehives.

Because of their fragility, we do not touch, but marvel at their colours, the banding and their height. Today the walk is 4km return. We wind our way through the beehives, beside piccaninny creek up ladders and through steep gorges finally arriving at Cathedral Gorge. A huge amphitheatre has been carved out by the raging waters during wet season. The acoustics are amazing, the sound of voices reaching across the huge expanse. Music, opera have been performed within this red rocked amphitheatre.

We sit silently, enjoying a picnic lunch we each have carried in.

Back at the lodge we take an afternoon stroll up onto a rocky knoll. We turn our backs to the sun and watch mesmerized by the colour changes on a rock formation called the Coalition, half the height of Uluru out of the ground but the same height underground.

Our stay is almost over. Tomorrow we fly back to Kununurra, back to civilization, away from the flies, away from the solitude, away from the voices of the past. I will be forever grateful for the opportunity to experience the vastness, the colour and the sounds of this primitive land.