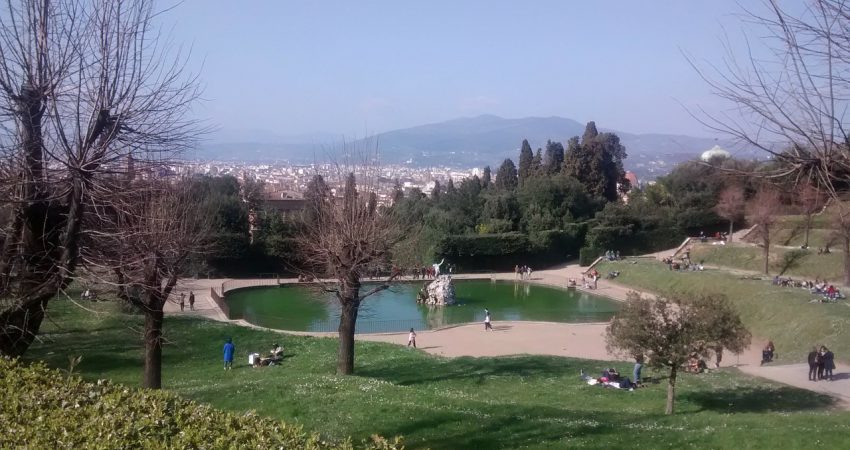 The gardens were laid out by Eleonora di Toledo the wife of Cosimo 1 de’ Medici in the 16th Century. Both Giorgio Vasari of the Vasari Corridors and Bernardo Buontalenti assisted in the planning of these lavish gardens.

As we climbed the slope we came across the Fountain of Neptune holding his trident aloft. Further up the hillside was the Fountain of the Ocean with its statues of Perseus and Andromeda in the surrounding moat…beautiful Roman antiquities.

A double staircase beckoned us. At the top was a rose garden, devoid of flowers at this time of the year. Next to the gardens was a Porcelain Museum. Virginia is a fan of porcelain from the Renaissance period, both in Italy and France.

The morning had become chilly with the occasional rain shower. We headed down to the Palazzo.

The palace, which houses several important museums, was built in the second half of the 15th century. The original building was purchased in 1550 by Eleonora da Toledo and became the official residence of the Medici family.

Today, the palace and the Boboli gardens house the Palatine Gallery, the Silver Museum, the Museum of Modern Art, the Costume Gallery, the Porcelain Museum and the Museum of Carriages. The Palazzo is huge and while outside gives the appearance of a severe and powerful building, inside is luxurious and a testimony to the wealth of this famous family.

Under a beautiful statue of a man and woman were the words ‘Then remember me, I once was Pia’. This I soon discovered was in the final lines of Dante’s ‘The Divine Comedy’.

History, art, architecture Florence has it all and we were lost within its fold.

My Sacred Italy: A Tour into Tuscany