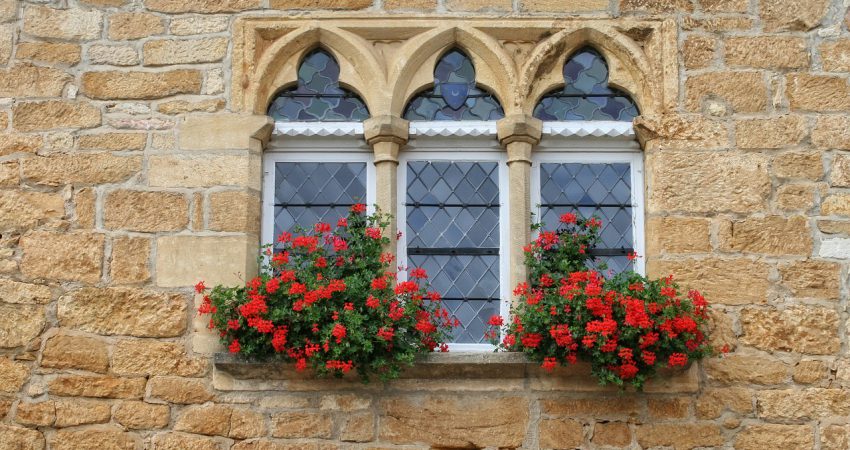 The small town of St Maximin-la-Ste Baume sits in the central Var department in the South of France. Here can be found the magnificent Basilique Ste-Marie Madeleine, an 18th Century town hall and the 14th Century Royal convent with its central cloister, our home for the next two nights.

We settle ourselves in our room then head out for a walk. The Basilique is behind the hotel. Founded in 1295, work continued intermittently until 1532 when it was decided to leave the Basilique as it was. To this day there is no portal or belltowers and the west front has been left unfinished.

While the outside is plain without adornment, on stepping through the ancient wooden door we are amazed. Breathtaking in its beauty, magnificent in its internal height…there is a main apse which is flanked by two smaller apses while the great nave is flanked by sixteen chapels. We circumnavigate its immenseness, sit in a pew and admire the wood panelling of the choir and the impressive altar.

There is a crypt in the Basilique that holds the bones of Mary Magdalene and the stone coffin in which her body lay for many centuries. Also in the crypt, inside a golden reliquary, is her skull. We venture down the stairs passing a reclining Mary holding the jar of ointment used to anoint Christ’s body. Her eyes turned down, sadness etched on her face.

The crypt is a small area. No one speaks for we know we are in the presence of one most holy. Love and a peaceful energy permeate the space. Her skull is difficult to see behind the golden reliquary but there is no doubt she is there. I am amazed, for we are in a Catholic Basilique and Mary Magdalene is venerated. I have a lot to learn over the next twelve days.

We stay a while then move on, allowing others the experience. Back up the stairs we take a seat in a pew close to the stunning altar. The energy inside these high stone walls is transformational. We leave, touched by Mary’s presence.

It is close to lunch and a group of us head down a beautiful pedestrian shopping street. I buy a summer dress; someone buys an ice cream and when we reach the town square we find Kathleen and some others from our group. We laze the afternoon away in a terraced café, getting acquainted.

I ask Kathleen about the village of Minerve and why it isn’t on the tour. I have visited twice and know some of its Cathar history. She tells us we are going but it is a surprise. She asks me about my injury and is surprised it is a burn. While I connected Jeanne de Arc with my burn, Kathleen said ‘Minerve, Montsegur.’ I shiver, remembering the fate of so many from these medieval villages.

Back at the hotel we ready ourselves for dinner in the Hotel Restaurant. Dinner is in the cloisters, behind the archways. A beautiful garden lies in our forefront. After dinner Sharon begins a game at our table. We each take a French name and give ourselves a life story. It is a great fun. Our imagination knows no bounds. Some months later, on returning to our homes, the game we played becomes the central theme for my short story ‘Le Couvent’ and Sharon’s ‘Laurel Doves.’

Later in the evening some of the girls venture into the chapel within the Hotel grounds, where they hold an séance. I decline the invitation so cannot tell the events of the evening. I will leave this story to those who were there.

Thursday morning dawns bright and beautiful. Today we are driving to Ste. Baume and making the climb to the Grotte Sainte-Marie Madeleine. The Grotte is a cavern cathedral carved into the mountain ridge, Massif de la Sainte-Baume…some 1147metres high. Legend tells us Mary Magdalene lived here after arriving in France around 40AD.

Kathleen advises us the climb is challenging although there is a path, The Royal Road, built in medieval times.

As the bus leaves the hotel, a priest and nun are standing outside the gate. They wave, we wave…I know it sounds like the beginning of a joke, but it wasn’t. Something significant passed between those of us in the bus and the young priest with the friendly face.

Some time later we arrive at St Baume. At the foot of the Massif is a chapel with beautiful hand painted murals…a welcoming site for the many pilgrims visiting the Grotte. The murals tell the story of Mary’s trip from Alexandria, who came with her, and their arrival in the South of France.

I purchase a walking stick to assist me in the climb. The grotto seems to hang off the edge of the mountain. Looking at it from the bus I thought, for me, the climb would be impossible. Fortunately there is a track, a steep track through the forest. We leave the chapel area stopping at the ancient oak where a prayer is said for a safe climb. We are already at 300 metres.

I begin with enthusiasm but soon slow down. I sit and drink some water then gather my strength and walk on. There is little talking along the way. The track is wide but steep. Many pass me, but like the tortoise, I keep moving. The forest is beautiful, the trees majestic and the path ancient and worn. I feel embraced, enfolded in a gentle love. A story is beginning to form somewhere in the recess of my brain.

It is told, in Mary’s day, sinners would climb to the grotto on their knees in penance. I am pleased we are climbing in 2015.

I reach the cistern, fresh mountain water, and refill my water bottle. From then on signs advise us ‘to proceed in silence’, although, at this stage speaking and climbing is way to difficult. The path becomes steeper. I come out of the forest. Before me is the sheer rock face with the church carved into its side.

A long flight of stone stairs takes me to double wooden doors, the entrance to the church and Dominican monastery. The monks hold Masses and processions within the sanctuary. To the left before entering the Grotto is the scene of the three Marys kneeling at Jesus’ feet as he hangs from the cross.

Up more stairs and we are on a terrace. Before us is the church carved into the rock. To our right is the monastery, behind us…a stunning view across the La Baume Valley.

Large wooden doors, the entrance to the church, stand open. We enter the grotto. It is dark, cold, damp and huge. This cave, carved into the rock, holds a full size chapel. Beautiful stained glass lets in light, while candles assist in the illumination. Water drips continuously through limestone walls into a stone cistern. The water is icy cold, mountain fresh.

We spread out, finding our own place to contemplate our life and that of Mary and her followers. We sit, enjoying the quietness, serenity and solitude.

Here, in this simple but beautiful chapel I realise this place is not about The Institution of the Church, but about Mary Magdalene, her journey, her story.

The walk down is slow and I marvel at the fact I made it at all.

We leave around 3.30pm. Tomorrow we drive to Saint Maries de la Mer.

10am the next day as the bus drives out of the hotel, disaster…or was it? Someone in the hotel closed the gate on the bus, ripping off the side mirror. The hotel staff and driver attempt to fix it with duct tape but to no avail. We are told we will be here till lunchtime while they fix the bus.

No problem, we are more than happy to wander the village. Some of us go back inside the Basilica while others shop, eat or have coffee. We arrive back at the hotel around noon and are told to come back at 2pm. We are waiting for a new bus. We find a restaurant and have lunch. Very soon whispers spread from one coffee shop to another; from one dress shop to another…something is happening at the church.

An invitation has been extended to Kathleen’s tour group. We have been invited by the priest of the Basilica Sainte-Marie Madeleine to enter the sacristy and receive a blessing with the sacred reliquary…a gift not normally bestowed on ordinary folk.

What happens over the next hour is life changing for all twenty-nine of us…an amazing experience, special and private. There are no photos taken although one of our members manages to recall the entire event. I thank Susan for sharing her journal.

Because of the privacy of this special event, I have written a précis of Susan’s notes.

Father Declan Gibson met us at the wooden door leading into the sacristy. Chairs were laid out in a ‘u’ shape. We took a seat.

He told us when he saw the bus leaving yesterday, something spoke to him…that he had special work to do with those on the bus. Today, as he saw us in various places around the village, he spoke to some of our group and discovered the bus problems. It was then he realized he had been given this time for a reason.

He spoke of the power of love and how that was the essence of Mary Magdalene…that love was the only power, the only reason we are and were created was to live love, to express it, reflect it, magnify it. He then offered to come to each of us individually to bless us with the reliquary.

The relic was a strand of Magdalene’s hair, which was housed in a reliquary of gold, which looked like a hand mirror. It had flame forms radiating out from the oval glass centre in which the strand, mounted on a cube of what looked like cork, resided. Father Declan held it up before our group.

Everyone was quiet. The initial scuffling and crunching of plastic bags subsided, mostly people looking for hankies or tissues. There were some sobs and snuffling’s, but now, even those seemed suspended. People sat, many with their eyes closed, some clasping hands, some with their eyes wide open, not wanting to miss a thing. We sat on wooden pews, not old, but the floor was solid stone. Father Declan began his ministrations. He took his time with each person, seeming to intuit what needed addressing.

Father Declan spoke once more to us as a group, reassuring us that there was nothing on earth that could withstand the power of Love. That whatever it was we were going through, whatever anyone had done to hurt us, it was a gift, an opportunity to learn how to love more, to learn more about love. We then filed out individually, Father Declan, an Irish Priest, embracing each of us with a hug and words of encouragement.

The bus was replaced…ready to leave. We left around 3.30pm…twenty-nine souls in a state of Grace.

We arrived in Maries-de-la-Mer in time for dinner.