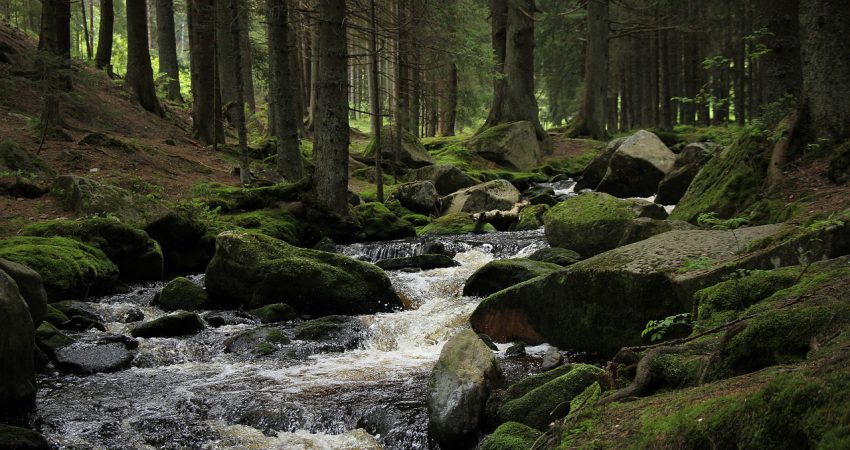 Once upon a time in a small village called Nymboida there lived two children, Dorothea Rosebery and Herbert Jethro. Dorothea and Herbert’s parents owned the local store selling groceries and petrol. All the families in the district came to their shop, for it was the only one in the area.

Nymboida was in the middle of a magnificent rainforest. There were lots of creeks, waterfalls and trees so tall neither Dorothea nor Herbert could see to the top. The children imagined a giant lived high in the branches, because when the wind blew, they could hear a noise like someone whistling.

Every year, just before Christmas, the local timber cutters would cut down one of the tallest pine trees in the forest and bring it to the village. The children would wait for the old man who lived in the forest, to come with his handmade stars and streamers to decorate the tree. Then on Christmas Eve, all the families would come into the village. They would light a fire nearby, and everyone would sing Christmas Carols.

This year was no exception. The timber cutters cut down the tallest pine tree and brought it to the village. It was in a large pot waiting for the old man and his decorations.

But now it was Christmas Eve and the tree remained bare. No one in the village or outer areas had seen or heard from the old man. Dorothea and Herbert were afraid he wouldn’t come.

‘What will happen to the tree?’ Dorothea asked her mother as she stood on the veranda of their shop. ‘If he isn’t here by the time the villagers arrive we will have a bare tree. No one will want to sing Christmas carols.’

‘You may have to decorate the tree yourselves,’ her mother replied.

‘But we have no stars or streamers like the old man,’ Herbert cried.

‘You could start making some. Why not find the other children and see if they can help.’ Their mother left them standing on the verandah.

Dorothea and Herbert didn’t know how to make decorations. They always arrived with the old man. They went off to find the other children in the village.

When they were all together, Dorothea said, ‘Our mother has said we will have to make our own decorations, but I don’t know how to, do you?’

All the children looked blankly at Dorothea and Herbert.

‘We don’t either,’ they chorused.

‘Then I vote we go look for the old man,’ Dorothea declared. ‘He may be hurt, he may have fallen down, but we can’t let our parents know. Go and get your boots and a raincoat and meet Herbert and me back here.’

And so it was, late in the afternoon, all the children in the village headed off into the forest to find the old man and his Christmas decorations.

But the old man had set out from his home, high up in the rainforest, early that morning, carrying with him his sack of stars and streamers. Along the way he become tired and sat down beside a creek to rest. While resting he heard what sounded like an argument between the birds of the area and an old tawny mouth owl.

He watched the birds as they flapped their wings and flew around, in what seemed to him, an angry and upset manner. The old owl sat outside his home, a twisted small tree. He appeared to be shaking his head and quietly saying, ‘I told you so! I told you so!’

Nearby to where the old man sat, he could see the timber cutters had been. Not just one tall tree was cut down, but many. The birds flew between the owl’s tree and where the other had once been, and back again. Eventually settling on a branch above the owl’s home. Some of the birds ventured into the hollow of the tree where the owl lived.

It appeared to the old man as he watched the scene before him that the timber cutters had taken away the birds homes and they were complaining to the owl. He thought of the saying, ‘as wise as an owl’, as he watched the owl invite the strangers into his home.

So moved was he by the owl’s kindness he decided to help make Christmas for the birds, the best ever. He took out his stars and streamers and began to decorate the owl’s tree. The birds watched from high up in the branches and began to sing as the old man placed each star. Soon there were kangaroos and possums, wallabies and wombats, echidnas and lizards all around the tree, dancing and singing to the music of the birds.

As the children made their way into the forest they heard a strange sound. Following the noise they found the owl’s tree and the old man surrounded by all the animals. The children squealed with delight at the sight of the beautiful tree with its stars and streamers.

‘Why have you decorated this tree?’ asked Dorothea.

‘The birds were very sad because the timber cutters took down their home, but the wise old owl, he offered to let them stay here. I decided to help celebrate Christmas in Nymboida forest by using my decorations…and look what happened.’ The old man looked around. ‘How did you children get here? Where are your parents?’

‘We came looking for you. We thought you might be hurt.’ said Dorothea. ‘Our parents don’t know we’ve gone.’

Just then all the parents from the village arrived. Having discovered the children missing they had set out to find them and the old man.

‘Dorothea, Herbert we were so worried.’

‘Look Mum and Dad,’ Dorothea cried with excitement, ‘isn’t it beautiful. Can we stay?’

And so from that day on, Christmas Eve was celebrated in the forest around the owl’s tree with all the forest animals. The old man bought his magic stars and streamers and all the villagers and their families attended. Christmas carols were sung and best of all, the birds were able to keep their homes.