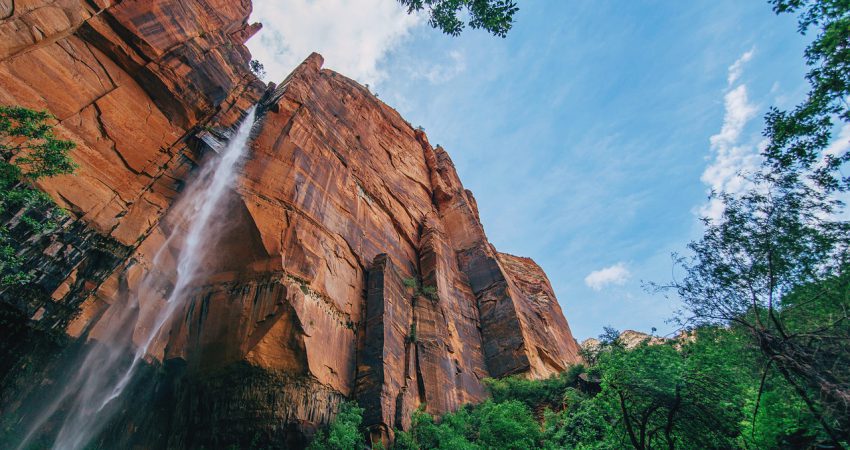 The Kimberley, wild, remote, untamed, unpeopled, a myriad of colours abounding with wildlife to take your breath away.  The largely untouched billion year old landscape harbours some of the oldest forms of art known to man; ancient Aboriginal art sites and the infamous Bradshaw Paintings.

Our trip along the Kimberley Coast began with a flight aboard a six seater Cessna from Broome to the Mitchell Plateau. The flight path took us over amazing towering red cliffs contrasted by the turquoise waters of this rugged coastline. Three hours later we landed on a dirt strip in Mitchell Plateau in the heart of this untamed wilderness.  Once on the ground we transferred our baggage to the waiting helicopter and flew over the Mitchell Falls, a four-tiered spectacular sight all year round.

Half an hour later we landed on the beach at Naturaliste Island. For our travelling companions, who were first timers, they finally took their first breath. Our home for the next seven days, K2O, was anchored off the island.  Soon we were aboard courtesy of a flotilla of small tenders.

K2O can accommodate twelve passengers and has six, very dedicated and passionate crew. Our cabin was large with walk around double bed and ensuite. The boat was fully air-conditioned, with a well stocked freezer and gourmet galley. All meals were freshly prepared on board.

Each day we traveled further south towards Broome our final destination.  Along the way we visited the Mermaid Boab Tree where a young British sailor carved his ship’s name, Mermaid, almost two hundred years ago. From there we travelled up the Prince Regent River to King’s Cascade waterfall. It was here in 1987 American model Ginger Meadows was taken by a crocodile while swimming from the waterfall to her boat. We also were stalked by one of these fascinating creatures as we showered under the fast falling water while standing in the small tenders. 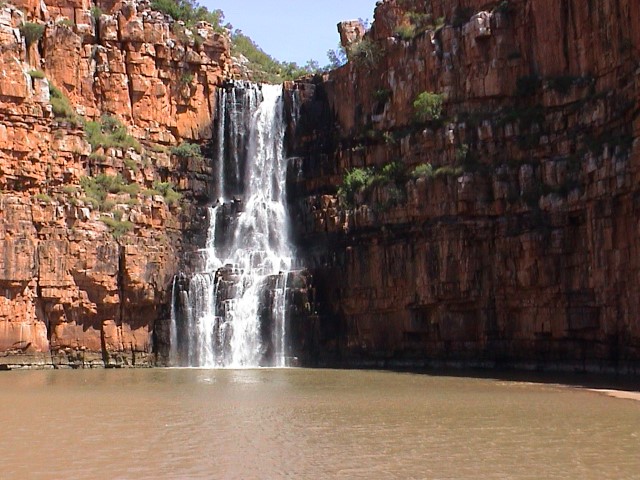 After days of watching crocodiles sunning themselves along the banks of the many creeks and rivers, experiencing the majestic humpback whales breaching around the boat, watching a mother humpback push her newborn to the surface for its first breath, following huge white sea snakes as they made their way across our path, we began to think our captain had a magic remote to call up whatever it was we desired.

We visited Camden Harbour where in 1864 the first attempt at European settlement in the Western Kimberley was made. Three ships and seventy potential settlers arrived late in 1864.  By October 1865 all the sheep had died and the few remaining settlers packed up their meager possessions and abandoned the camps, returning south.

A climb to Raft Point with its historically significant aboriginal art was challenging, but worth the effort. The following morning we arrived at Montgomery Reef.  To wake up on a 72ft boat and look up at this reef will leave you asking, what next?  With the tide falling, the water left in the lagoons roars its way down into the deep channels that divide the reef. 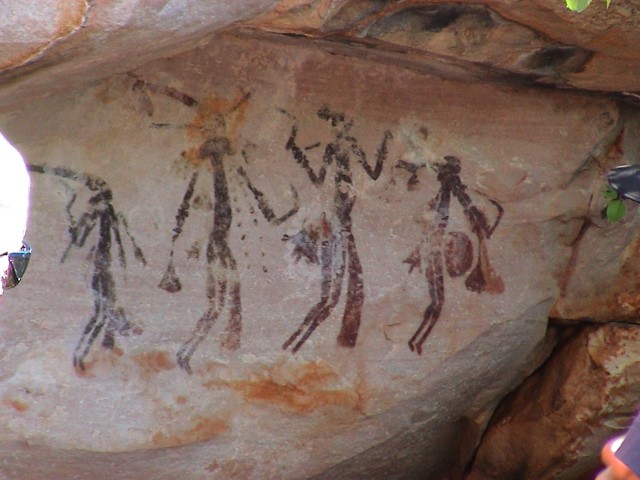 Next Stop Talbot Bay and the Horizontal Waterfalls where massive tidal movements create a waterfall effect as water banks up against one side of the narrow cliff passage. Definitely not for the faint hearted.  As we clung to each other the crew took us, four at a time, through the erupting whirlpools, first one then another where we emerged into a bay of indigo water. 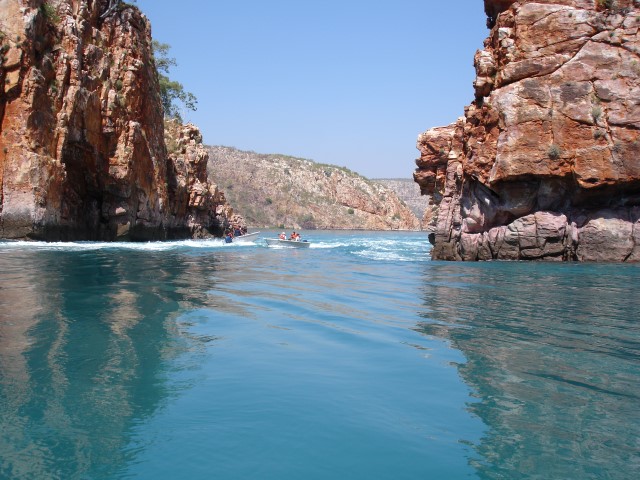 We were nearing the end of our voyage but tonight the crew had one last special event, the lunar eclipse. So here we were somewhere between Cape Leveque and Broome, been entertained by the night sky.

Broome with its multifarious population stands at the forefront for most trips, whether by sea, air, car or coach, to the Kimberley’s and surrounding districts.  A town were foreigners are the rule; a town famous for its flamboyant history, Australia’s last frontier.  A town where you can sail on the sparkling blue waters of Roebuck Bay, walk the endless white sands of Cable Beach, eat at Matso’s famous Brewery or watch ‘Staircase to the Moon’ unfold from Town Beach.

History abounds at the famed Cable Beach Resort situated on one of the most beautiful beaches in the world.  The style of the resort was inspired by the 19th century pearl rush and built by Lord Alister McAlpine, the man who converted this pearling port into a thriving North West town.  To watch the sun setting over the Indian Ocean from the Sunset Bar, gin and tonic in hand, is like finding the Holy Grail. Once found you want to keep coming back and sharing with those closest to your heart. 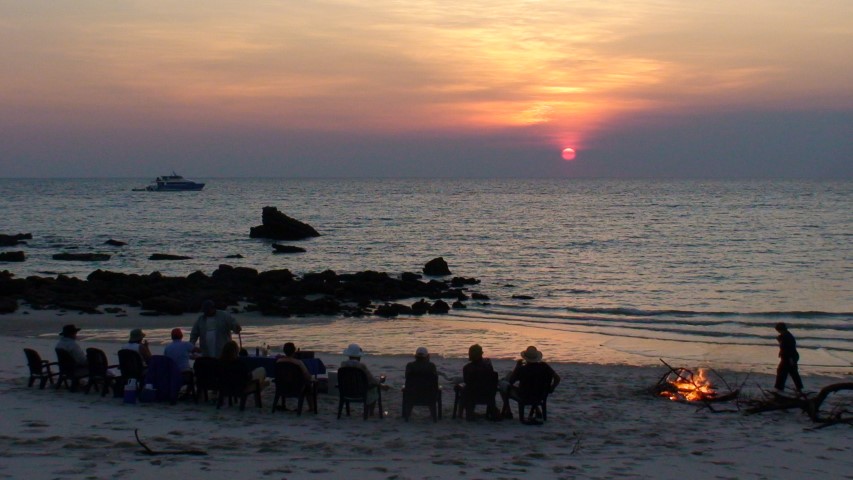 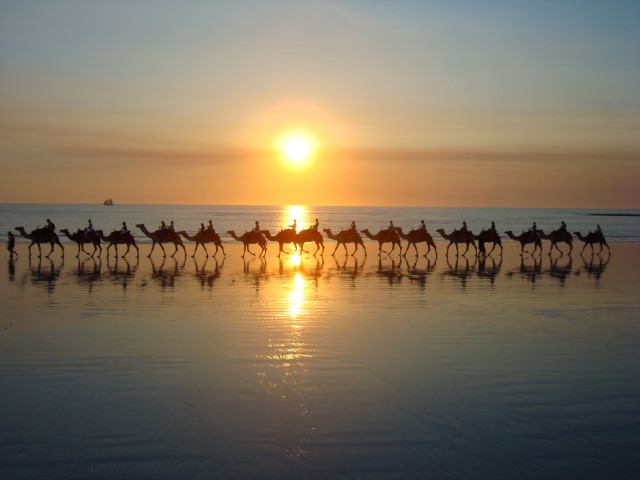 As the saying goes, if you don’t go, you will never, never know.  Discover the beauty of this place and all its inhabitants.  And when you’re finished in the Kimberley’s take a trip south and visit some of the 200 vineyards in the world famous wine region of Margaret River.  Watch a concert at Leeuwin Estate Winery or watch the whales as they travel along the coastline, north and south.

Escape from the hustle and bustle of city life.  Experience some of the best restaurants on the West Coast, stay at first class resorts nestled in some of the most stunning and picturesque landscape which is characteristic of the south west.  If its beaches you prefer there are many with surfing being a major part of Margaret River life.

Next stop Perth, which offers an exciting mix of great weather, stunningly natural beaches, great fishing, Rottnest Island, the Swan Valley Wine Region and my favourite, Indiana Tea House at Cottesloe.  When you’ve finished seeing the sights and take a day off for some fishing in the Indian Ocean off Hillarys Yacht Club, you might be lucky enough to have a pod of whales frolic and dive around your boat.  And if you stay long enough, entranced by the whales, a Collins Class submarine, black and ominous against the azure sea and sky may just come passing by to finish off an exciting day.

Later in the day a visit to the Rottnest Island Church to thank the powers that be for a wonderful exciting and eventful holiday, is a fitting end to your visit to Nature’s Masterpiece, Western Australia.