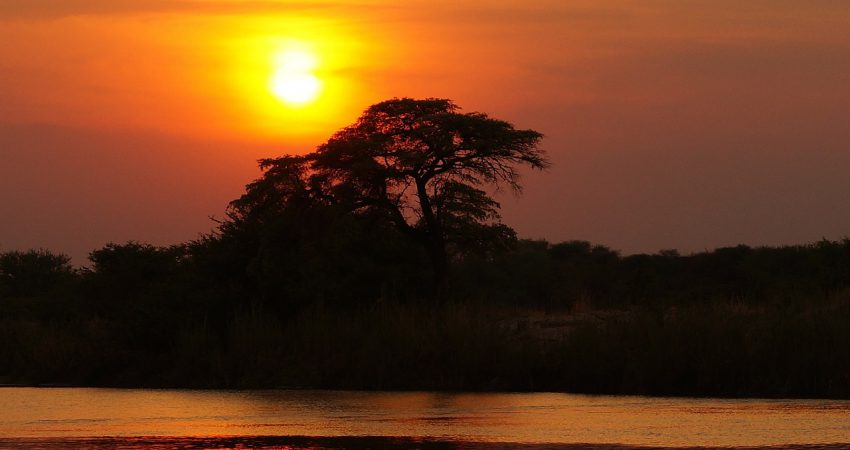 Ten o’clock the next morning the train pulled into Victoria Falls Zimbabwe. Disembarking we went in search of our driver eventually locating him and his Wild Horizons four wheel drive. We left the train station and drove to the border of Zimbabwe and Botswana.

When we passed into Zimbabwe on the train, we paid $50US for a visa. We expected to pay again on entering Botswana. Fortunately we cleared customs with no further payment. Although on leaving the small busy customs house we were directed to walk through a tray of some liquid. Why…possibly to leave Zimbabwean germs in Zimbabwe. Being the only women in an otherwise busy area, we opted to do as directed.

Walking back to our truck we discovered our bags had been transferred to another four-wheel drive and we had a new driver. Two hours later we drove into Kasane Airport and another change of driver and vehicle. Thinking now of our lack of questioning, doesn’t actually bear thinking about. But of course we were fine. For some reason each driver could only go so far. A driver from Ngoma Lodge, our final destination in Botswana, met us at the airport.

Since 1966 Botswana has maintained a strong stable democracy…a landlocked nation— 70 percent of its territory being the Kalahari Desert.

An hour after leaving Kasane we arrived at Ngoma Safari Lodge. Perched on an escarpment high above the Chobe River and open floodplains, the views were breathtaking. In the distance was Namibia. We loved Dulini, but here you could lose yourself in the views. Our eyes were like binoculars, searching for any movement way below us.

We were shown to our private suite…a short walk from the main lodge. We were here for three nights and we were triple sharing. Our suite was beautiful with similar views to the reception area. From our private plunge pool we could watch herds of elephants, zebra, kudu drinking at the many waterholes that dotted the escarpment. From our beds, we had the same views. Floor to ceiling timber-framed windows gave us an unimpeded panorama.

We had an outside shower that I enjoyed. Showering in the open with a view as above was amazingly liberating. Inside the suite there was a bathroom large enough to accommodate all three of us…at once. Although our suite was a short walk from the main lodge, early morning and evening we were not allowed to venture out without a guard. With no fences, animals roamed in and around the area. The spoor we saw each morning attested to this. At night after dinner, we sat around the outside fireplace… a wonderful spot to sit and ponder the day’s events with a glass of wine.

After unpacking we ate a late lunch then were introduced to Ocean our driver and guide for the next three days. He informed us the game park laws in Botswana forbid you from driving off the tracks to chase animals, thus making it more difficult to get up close…very different from the laws in South Africa.

We left the lodge and drove on the bitumen road until we entered the Chobe Game Reserve. On our drive we saw giraffe, large herds of elephant, kudu, impala, a family of warthog and zebra. This part of Botswana is a lush flood plain. Chobe National park has one of the largest concentrations of game in Africa. The Chobe River, which runs through the middle of the park, is a major watering hole for herds of breeding elephants, sable, giraffe and Cape buffalo.

That evening dinner was served on the verandah under the beautiful African night sky. Today had been a long eventful one. After a nightcap we left for our suite and the soft luxuriousness of our beds. The nights in Africa are quiet except for the occasional animal noise. We slept like the dead.

The day dawned beautiful …blue skies and a gentle breeze. After breakfast we left with Ocean … today we were going on a boat ride on the Chobe River. With five of us on board we motored off in search of what the African river would offer.

First to show themselves was a herd of elephant making their way down the embankment to the rivers edge. In groups of six or more they slipped into the water and began the long swim across to the flood plain in the centre of the river. Halfway across they stopped to play, obviously the water rendered them lighter, giving them the opportunity to attempt a bit of procreation. The wild makes its own laws.

The river is home to huge crocodiles, camouflaged within the grassy reeds. A family of Hippos roamed close to the shore and birds of all varieties could be seen…a great spot for the many bird watchers who visit Africa. Rounding the flood plain Ocean pointed out Namibia on the other side of Sedudu Island.

Back on shore we stopped at a picnic spot for lunch then continued on our drive. We drove beside the river in the hot afternoon sun. Spread out across the open plain we saw elephant, giraffe, kudu, and warthog. Ocean pointed out the many birds, small and large that inhabited the plains.

In the late afternoon we stopped beside the river for sundowners. Seemed the tradition of sundowners was prevalent throughout the African continent. On our return to the lodge we showered and dressed for dinner. Our days being full we found our nights short. A couple of drinks, a wonderful meal and we were ready for bed.

One nurse runs the clinic, seeing up to 15 patients per day. She works long hours and there are many terrible diseases in the area. The most prevalent are sexually transmitted and Tuberculosis. Posters depicting the symptoms of these diseases covered the walls on the small verandah. At first the nurse was reluctant to allow us entry to her clinic. With a word from Ocean she consented, but no photos. This was quite a sobering experience.

Leaving the clinic we drove a short distance to the Mabele Primary School. Entering the schoolyard through a gate we noticed the high fence surrounding the grounds, barbed wire atop. The grounds were dry, bare and dusty.

The children were excited to see us. They were interested in where we came from, what we were doing in their country. Their English was exceptional. We were invited into their classroom, looked at their work and the books they were reading. Their lessons were not unlike those at home.

Krys showed them on a world map where we came from. They wanted their photo taken, laughing and photo bombing each other

We followed them behind the thatched walls of their Custom House where small craft items were sold. Here attempting to grow in the otherwise dry, barren ground was what looked like a small grassy bush, its signifance a mystery.

They wore uniforms, some old and worn but clean. Their friendliness and exceptional English humbled us. We left some money with the head master, hoping the children would be the beneficiaries.

Back at the lodge we washed off the dust from the day. Then while Krys and Leonie had a drink by the pool, I swam. The pool was fashioned after a rock pool, the water quite cold. Later we packed our clothes, ready for tomorrow’s departure.

After dinner, Ocean had a surprise for us, a night game drive. With two new guests on board we headed out, taking a back track down off the escarpment.

We were off road! No one asked questions.

On a tree branch just off the track we saw a spotted genet, a small cat-like animal with a long tail.  His large eyes and ears were what we saw first. We continued down the escarpment. Out of the darkness loomed a large herd of elephant. Like dark blots in the night, only when they moved did we realise they were elephants. We stopped and watched them pass silently by the truck, amazed at their quiet footfalls.

From out of the silence came a growl that reverberated through our bodies. Ocean started up the truck and followed the noise. Down to the river, over rocky tracks, down ravines and then we saw them in the beam of the spotlight. We drove to where they were sitting …two beautiful males lions. We watched quietly, holding our breath mesmerised by their majesty…their red manes ruffling in the breeze. From the hill to our left came another growl. They stood up, sauntered by the truck, no more than four metres away, following the sound of the female.

As they passed by, they turned our way, looked directly at us and roared. Frightening and amazing all at once. We hoped we were a blur to their bad eyesight. They walked behind the truck. We waited until they moved away then Ocean turned the truck around and we followed.

The female was high up on the side of the escarpment. The males stopped when they saw her. She stayed crouched behind a log. There they sat, us watching them, they watching her. The night was silent, save for the occasional growl. A full Moon with a light blue tinge and millions of stars filled the sky. We were content, we were where we should be, enjoying the magnificence of this continent.

A wonderful end to a most glorious time in Botswana.