Our African Sojourn: Gorillas in the Mist 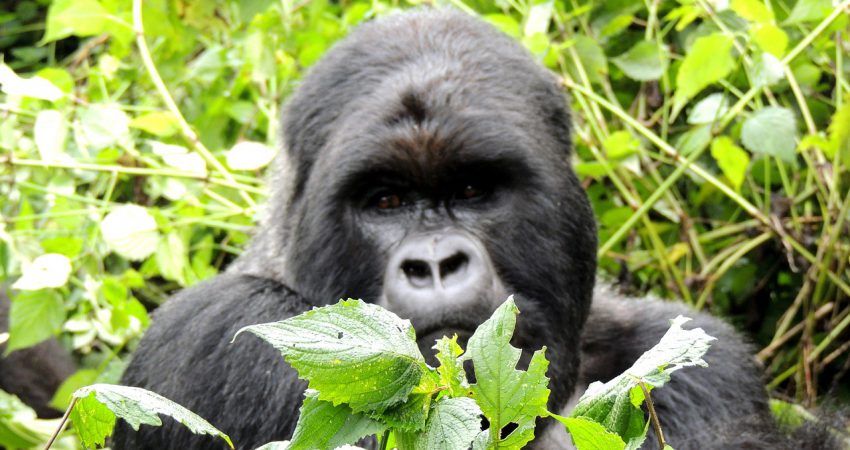 Gorillas in the Mist

Our flight out of Victoria Falls was delayed by an hour. Finally we were on our way arriving in Johannesburg by evening. Tonight we stayed in the Casino. Fortunately there was a food court attached so we ate in an Italian restaurant then back to our rooms for an early pick up.

Today we were flying to Rwanda, the next leg of our journey. After some mix up at the airport we finally found the correct queue…Rwanda Airlines. Our flights was a half hour late leaving, no fault of ours. On our arrival into Kigali we discovered Leonie’s bag was missing.

We waited for the next flight to arrive but when the bag didn’t turn up we left…the authorities assuring us Leonie would have the bag tomorrow. The drive from Kigali to the Gorilla Mountain View Lodge was approx. two hours. This stay would be for two nights. Tomorrow we would trek the Volcanoes National Park in search of gorillas.

The Mountain Lodge is in the National Park and consists of 25 individual cottages with views of the Virunga Volcanoes. A short walk from reception and the bar, took us along a garden path; I was on my own while Krys and Leonie shared. The cottages are built of stone with their own fireplace. The nights are cold being high in the mountains. Kindling was provided but unfortunately the fire dwindled to a smoulder long before the cold night was over.

Monday morning the 18th August – I sent our son Ben a message, wishing him a Happy Birthday.

Duncan our driver arrived at 6.30am. We drove to the National Park where we were separated into groups of eight. Our guides were Bosco and Jerome along with eight porters and two protection officers carrying AK47’s. We didn’t ask what they were protecting us from, best not to know.

We headed off walking through a gum tree plantation…the gums are used for building. Arriving on the edge of the park we first had to climb a high rock wall. This wall was supposedly built to keep the animals within the park and poachers out.

Once over the wall we began to climb. Up…up and up for the next three hours. We climbed through a bamboo plantation using our walking sticks and the tall straight trunks of the bamboo to pull ourselves up the steep incline. We stopped a number of times to take a drink and rest. Looking about it was easy to see who were the fit ones and who wasn’t. The porters laughing and joking as they navigated the steep, at times treacherous climb.

The porters offered to carry our backpacks, take our hands and assist us where needed. I was reluctant to admit defeat so pushed on until I finally gave up my backpack and took a hand when the going was tough. Exhausted from the climb and the heat, we stopped for a drink. A sound echoed down through the jungle… the gorillas were here, just above us, not much further. We were assured.

We dropped our backpacks, water and walking sticks leaving them with the porters. Taking only our cameras, we linked hands and climbed through the long reedy grass.

There, playing not ten metres away, were two…they were brothers. We felt the power of another day of African magic…silently we smiled at each other. This was why we were here…!!!

We sat and watched, like parents watching their children play, we were enamoured. We heard the rest of the group. They were higher up the mountain. The grass was matted reeds…our boots tangling themselves deep in the knots. We clung to each other in silence, silence being of importance. We mustn’t scare them away. We were in the clouds, 700 metres straight up from our starting point but much further from sea level. For Rwanda is called Land of a Thousand Hills.

And then we saw them, The Lucky Group…sitting on the side of the mountain. We struggled to find a secure footing, our cameras the only item allowed. We snapped and smiled at their magnificence. Lucky the silverback, sat quietly amongst his family.

There were twins, the only set in Rwanda, a baby enfolded within its mother’s embrace and other older siblings. The smiles never left our faces. This was what Africa was about, the pure beauty of its animals and the privilege of enjoying them.

We stayed an hour, our camera batteries close to flat. Then we began the long trek down off the mountain. Going down was somewhat easier, taking only two hours.

We made it safely back to our Mountain Gorilla lodge. Over dinner we chatted about our experiences. What this achievement meant to each of us. As exhausted as we were we would do it all again. Here in this timeless continent we discovered a resilience we didn’t know we had. We would be back. Next time we would share with out loved ones.

Tuesday…we had a two-hour drive back to Kigali where we were staying the night. After breakfast we packed and waited for Duncan to arrive. The lodge provided us with a packed lunch. We set off at 11am taking in the beautiful surroundings. The high mountains, the market gardens perched along the mountainside, the pineapple plantations and the people of Rwanda. Their colourful clothing, the friendly smiles of the children…we saw many of them walking along the side of the road, riding pushbikes, carrying sacks of potatoes. There was much activity on the road this morning.

And we mustn’t forget the gum trees…the gum trees of Rwanda which grown along the escarpments, at times blocking our view to the market terraces. Rwanda has a population of approx. 12.5million. The country’s main exports are coffee and tea.

We ate our packed lunch on the way. Duncan took us on a tour of Kigali. Some areas were so rich, with homes to rival those of Australia’s wealthiest. While others, often just down the road, were poor, third world areas.

We drove through food markets and heavy afternoon traffic. The city of Kigali is huge. Duncan took us to the Rwandan Genocide Museum. Here we stood upon a concrete grave, 250000 bodies entombed below us… the names on the walls a fraction of the bodies within.  Inside the museum we followed the story of the mass slaughter and systematic annihilation of Tutsi and moderate Hutus by members of the Hutu majority. Authorities estimate in the 100-day period from April 7 to mid-July 1994 500,000—1,000,000 Rwandans were killed. Husbands killed wives, brothers killed brothers, fathers killed children, no one was safe or immune.

The horror of this place left us feeling empty and vulnerable. For the Rwanda of 2014 seemed to have no connection to the Rwanda of 1994 except for the fact the people surrounding us, whether they be shop keepers, hotel staff, airport staff or drivers and guides would have been alive and living here during the darkest days of Rwandans history. Which side were they on?

Our hotel was in a nice area, security was high, airport style. We decided to eat at the hotel rather than risk eating out. We were in bed early as we had a 6.30am pick up.

Our African Sojourn: The Victoria Falls