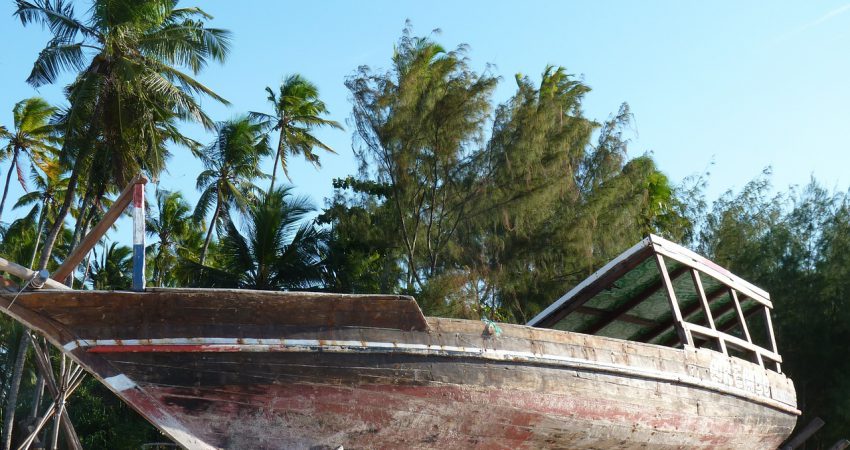 Wednesday morning Duncan picked us up from the hotel and dropped us at the airport. We were now on the last leg of our African sojourn, exotic Zanzibar.

Arrival was crazy. We had to fill in forms for Ebola and pay another $50US each for a visa. This was the third time…Zimbabwe, Zambia and Zanzibar. Was it the ‘Z’ countries or an African thing? We paid the money and made our way into the open-air arrival area, looking for our hotel pickup.

Mussa would be our driver and guide for the next two days. On the drive into Stone Town he asked if we wanted to organize tours for the next day. We felt we were being scammed, but with only two days here we wanted to see and experience as much as possible. We agreed to a tour of the town followed by a spice tour and finishing the day with a sunset cruise on a Dhow.

Our hotel was the Dhow palace… a Muslim hotel …no alcohol served. At the time of booking, this was unknown, but we loved the look of the four poster beds with curtains all around…and for the first time since leaving home we each would have our own room. It was nice to have some space, even if only two nights.

The hotel once belonged to a rich merchant, Sheikh bin Mujbia in 1559AD and was kept in his family for three centuries. A living museum, the Dhow Palace contains artefacts, furniture and ornaments from these centuries.  Now we had certainly stepped back in time to a place full of mystery and exotic looking men in white robes with bejewelled daggers hanging from their belts.

I was in my element, as stories of sheiks and English women began to fill my dreams and my days. Two days was not going to be enough. I would have to return.

The streets were lined with shops of all kinds, leather goods, clothes, wooden artefacts, jewellery …tanzanite. Anyone who knows me knows Tanzanite, after pink diamonds, is my favourite stone. The sparkling blue is bewitching. Having already purchased a tanzanite Southern Cross pendant in Cape Town, I resisted the overwhelming urge to purchase more.

We could see the blue waters of the Indian Ocean at the bottom of the street. We made our way to the beach, found a seat in a bar and watched as the sun slowly dropped down over the azure waters, the Dhows silhouetted on the horizon.

We ate dinner in the hotel, without our wine, and fell into bed. The day had been long and eventful…from Rwanda to Nairobi to Zanzibar—the flight was long.

Thursday—Mussa, our guide, picked us up at 9am… a strange little man who was forever adjusting himself and loved to talk about sex. We ignored his innuendo and stayed together, watching each other’s backs.

In the 19th Century, Stone Town was famous as a centre for the selling of slaves. As part of our city tour we visited the Slave Monument, the Slave Market site where the slaves were auctioned and the Whipping Post. The ones, who were quiet when whipped, sold for more.

We visited the Slave chambers where they kept up to 35 at a time…a concrete chamber with narrow horizontal openings to the outside. In the days of slaves these  openings were barricaded with iron bars. Feeling claustrophobic we left and walked to the House of Wonder. So called because in the late 1800’s it was the first home with running water, a lift and electricity.

Beside the House of Wonder, was the Sultan’s Palace…three stories of luxury with wide verandas and views across the water. Inside was a beautiful marble staircase, huge portraits of Sultan Seyyid Majid b. Said, banquet rooms and a three level timber staircase. We wandered in and out of all the rooms, taking in the atmosphere. I knew this would be a setting for one of my stories.

On our walk back to the hotel we stopped and photographed the façade of Freddie Mercury’s home. The lead singer of the famous band Queen, Freddie was born, Farrokh Bulsara here in Stone Town in 1946.

After lunch Mussa drove Krys and I out of town to start our spice tour. Leonie was feeling unwell so we left her in the hotel. We walked around the farm with Mussa as he pointed out all the different spices growing. We were surprised by the way many everyday spices began their life.

Back at the hotel Leonie had slept part of the afternoon. Feeling slightly better, she walked with us to the beach for our Dhow cruise. The cruise left late afternoon. We removed our shoes, rolled up our pants and stepped aboard the beautiful timber Dhow…from the beach, up the ladder and into the clear blue waters of the Indian Ocean.

We motored out into the bay then the crew hoisted the sail. With the motor off, the only sound to be heard was that of the apparent wind as it moved across the ancient wooden boat. A glass of wine, hors d’ oeuvres…we sat back and watched the beautiful orange colours turn a vibrant pallet of pinks purples and blue. A chance to reflect on the last three weeks, the people places and animals we encountered. Tomorrow we would take our flight back to Johannesburg for one last night in Africa.

The time was here for us to return to our reality.

Our trip had been amazing. We were fortunate enough to see all the big five, to meet some amazing people, visit breathtaking places and for this land to inhabit our minds and souls. Some day, some time we would return. One single trip to Africa would not be enough.

But wait we were still in Zanzibar and Africa wasn’t finished with us. Next morning we did a quick shop, souvenirs, jewellery…just a few little pieces of tanzanite. Leonie was still feeling unwell, so double dosed on reflux medication.  On entering a number of African countries, Rwanda, Zanzibar we were required to complete an Ebola form. Where had we been? What had we done? Did we have a fever? Were we feeling unwell?

Our pickup arrived for the airport. Leonie took the back seat of the van while Krys and I were behind the driver. The drive was about thirty minutes. Leonie began to do the crocodile roll on the back seat, breaking out in a sweat, groaning in agony, unfastening her clothes. We asked the driver to stop so we could get some milk. Hmmm we were in Zanzibar, what were we thinking.

While I tried to disguise the fact Leonie was perhaps dying on the back seat, Krys looked out for a grocery store of some type. Nothing. We got to the airport. Leonie couldn’t manage her suitcase so between Krys and I we got them to the check-in counter. All the while I am telling Leonie to smile, look good, please don’t look like you have a fever. As much as I loved Zanzibar we didn’t want to be put into quarantine. We checked our bags in and went through to customs. Leonie was wet through. The more she panicked the more she was sweating. She smiled at everyone and said many prayers to get herself through safely.

Krys was through first and went off to buy some milk for Leonie. Then I was through…up the escalator to the departure gates. I waited. Airport staff tried to move me along…board the plane. I refused, waiting for friends I said.

For a brief moment I wondered if the plane would leave without us. Where was Krys? Where was Leonie? We were being called. Our luggage was on. We seemed to be all over the place except where we were supposed to be. Finally Leonie was upstairs. I tried to board the wrong flight. No, no, someone yelled at me.

And then like some African miracle we were on the plane. The doors shut we took our seats and breathed a huge sigh of relief. We considered ourselves lucky. In a trip that took us from Cape Town to Sabi Sands to the Rovus Rail to Botswana to the Victoria Falls to Rwanda, through Nairobi and down to Zanzibar, this was it, the sum total of our stress.

This is Africa, where we were meant to be.

Our African Sojourn: Gorillas in the Mist