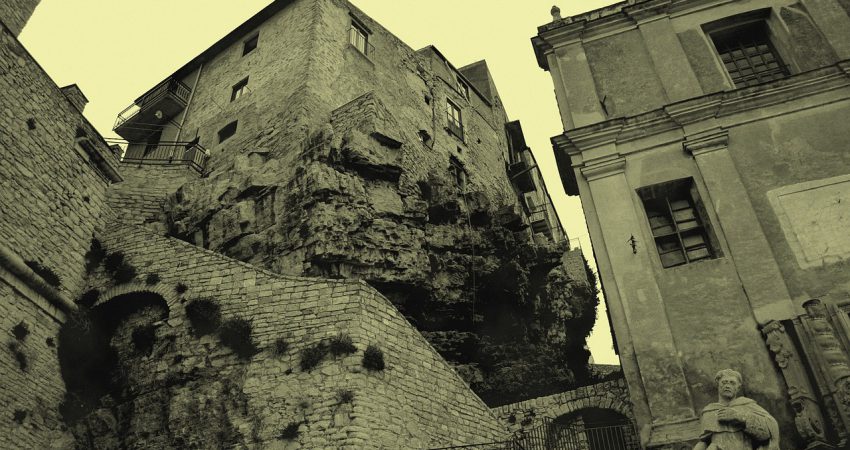 We don’t know why, but all four of us expected a small Sicilian village, not a metropolis. There is a daily street market that spreads over a huge area with great bargains. If you are looking for food then it is best to visit in the morning.

We spent our first afternoon wandering through the markets as they were about to close. Next day was Christmas Eve. Di was unwell and spent the day in bed while the three of us walked down to Piazza Duomo. We found a bus tour doing the sights of the city so we hopped aboard. This was a great way to get our bearings and see just how big this city was. Later we spent time in the departments stores across the road from our hotel. Our hotel was in the main street of town; very convenient. We checked on Di; she was still sleeping so we went to the local pizza place for dinner. We hoped she would be better for Christmas day.

Christmas day arrived. Di was on the mend. We went for breakfast and then called our families back home wishing them a Merry Christmas. They were enjoying the pool. Gloves, fur hats and jackets later we left the hotel and drove towards Piazza Duomo. It was a beautiful blue sky crisp cold morning. We parked and walked to the Piazza where we watched the old men of the city gathered under the Fontana dell’Elefante. We tried to imagine what they were talking about. Why they would be here Christmas morning. The conversations were intense and animated. Our photos told a story of political discussions intrigue and disagreement. Much later we drove out of town towards Dagala del re Santa Venerina. The maternal side of the family’s birth place. We had brought a lock of Mum’s hair; the idea being to return part of her to her birth place. Although still living back in Australia, at 88 there was no chance of her returning herself.

There is an Italian tradition of bonfires being constructed in the main square of town on Christmas Eve. In Dagala del re the fire was still burning Christmas morning. This was the perfect spot for our own small private ceremony. Steve and Di threw the hair wrapped in an envelope into the fire, blessing Mum with a long and healthy life. There were some young men from the parish visiting the church. When we explained why we were there they invited us in and gave us pictures of Mary Immaculate to take home for Mum. The Church was called Maria SS Immacolata di Dagala del Re.

From almost every point in Catania Mt Etna is visible. A very impressive sight.

We realised, as we stood and admired her majesty, both sides of the family were born and lived at the foot of active volcanoes. Was that an explanation for their obvious volatility.

Many photos later we drove out of town towards Taormina. At 669 feet above the Ionian Sea the view was spectacular. We had packed a lunch from the breakfast bar of the hotel and ate out of the back of our Audi. The air was fresh and beautiful. We spent a lazy hour breathing in the cool mountain air.

The road continued further up the hill so we went to investigate. Perched precariously at the top was the village of Castelmola. Here we found another bonfire, the remnants of Christmas Eve celebrations. Most of the town was closed so we wandered along the cobblestoned narrow alleyways. We found a restaurant open and enjoyed a late lunch of spaghetti and wine.

From here we drove on to Messina. From the ferry terminal we could see the mainland. It was quiet today but we could imagine the summer months busy and hectic with visitors arriving and departing. We drove back to Catania and rested before having Christmas dinner at the terrace restaurant of our hotel, Mt Etna our back drop once again. As was the case in Rome and Sorrento, Christmas celebrations were in full swing all around the city of Catania

Christmas Dinner was lovely. We had a great evening topping of an adventurous full day. Tomorrow we planned a long day travelling south to Ragusa and Syracuse. It was time for bed and a good rest.

Boxing Day we drove towards Ragusa. Initially we drove into the new part of town and were disappointed because of its obvious newness. After some negotiating of the small roads we arrived in the old area. Leaving the car Andrew Di and I walked down the many steps of each level. Truly a beautiful jaw dropping town. At the top of the hill is Ragusa Superiore while at the bottom of the gorge is Ragusa Ibla.

From Ragusa we drove to Syracuse and visited the San Giovanni Catacombs. These catacombs were excavated between 315 and 360AD. They are more open and spacious than those of Rome and quite easy to navigate. The catacombs were built as a mass burial ground for rich and poor Christians from the surrounding townships. In some places there were up to thirty corpses laid side by side in the crevasses dug out from the walls.

The day was fast running out so we headed back to Catania. Tomorrow we would drive to Palermo. We had been visited the home town of Steve and Di’s mother but because of the time of year we were unable to get any family information. This would have to wait until we were home.

Next morning we visited the Catania street markets before leaving for Palermo. The food variety and quality was equal to nothing we have seen in Australia.

From Catania we drove towards Palermo through the centre of Sicily. We stopped at Enna which is 931 metres above sea level. A magnificent mountain village with views back to Catania. We spent time at the Castello di Lombardia and marvelled at Mt Etna still following us in the distance.

We arrived in Palermo at 4pm but our room wasn’t ready. We spent the next couple of hours sitting in the beautiful old stone bar waiting for house cleaning to do their job. The hotel had been a stately palace frequented by royalty and movie stars over the years, The Grand Hotel Villa Igiea. As we drove into Palermo our thoughts had been, the accommodation was second rate but we were all very pleasantly surprised. What we found in behind the talk block wall was impressive. We ate dinner in the restaurant and drank a bottle of Fontanafredda La LePre 2009. Very lovely but expensive. I think tomorrow night it will be pizza or pasta for dinner.

The traffic in Palermo was crazy with tiny streets and mad drivers. We had thought Sorrento was crazy but Palermo made Sorrento look like a Sunday drive. We spent two hours trying to find a Laundromat. Eventually we were successful but not before driving round and round the city streets, parking illegally like everyone else and experiencing many near misses. Palermo is not for the faint hearted. We found a cafe near the laundromat and while our washing was drying had lunch. Later we found a supermercarto and bought some wine and food for dinner.

Back at the hotel Di set up dinner in her room; Panni, olives, cheese, ham, wine and carponata; the traditional Sicilian dish. Was a fun filled evening after a rather stressful day.

Next day Andrew spent a number of hours photographing the surrounds. The hotel was situated beside the marina and we could see cruise ships in port. The water was a beautiful blue. Later we drove to Segesta and its Doric temple. The temple dates back to 400BC. It was a long walk up the hill to where the temple stood but well worth the effort. The temple is the best preserved and most beautiful of all Greek archaeological sites in the Mediterranean. Built in the late 5th Century, views across the valley to the Gulf of Castellamare can be enjoyed by those taking the walk.

We left Segesta and headed to Marsala. Along the way we discovered a nail in our tyre. We removed it and presumed all was well but on our arrival at Trapani we found the tyre was going flat. We changed it to the small skinny spare and went looking for somewhere to have it replaced. Eventually we were able to have it fixed and drove on home. Tonight we had dinner at La Mattanza, pizza and pasta. Was a great night with great food. Tomorrow we fly out to Venice.