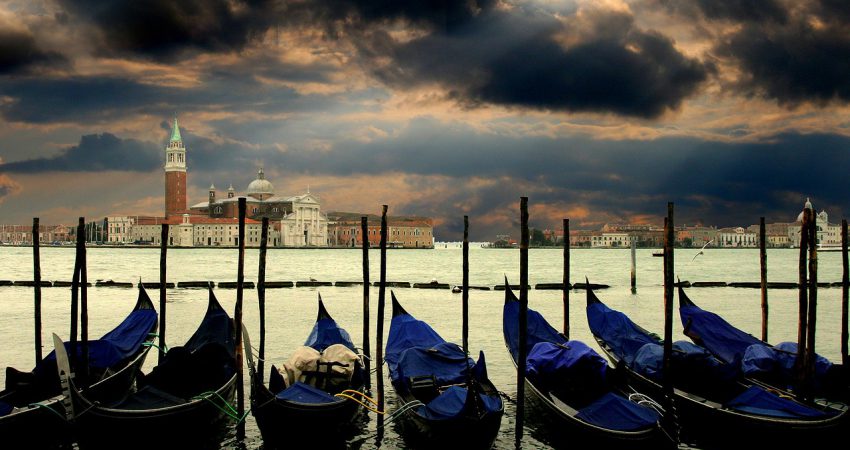 Our flight went via Rome arriving in Venice at 2.30pm. We had booked a transfer to our apartment. The water taxi took us to the closest point possible and we were met by a young man who walked us to our apartment. This time we thought we had booked a dud as we trooped towards the back end of Venice. Round the corner and we stopped at an old green door. Five locks later and we were in a foyer at the bottom of a flight of stairs. After our long walk from the water taxi, which included a couple of canal bridges and dragging our suitcases, we now had to make our way up the stairs. With everyone helping we were soon in the apartment. The building was at least 400 years old. Our apartment was beautifully furnished with strange iron chairs, sculptured lights and unusual wall art; making it appear to be an artist’s retreat. We unpacked and went for a walk to familiarize ourselves with the area. Down ever corner and around the bed we found restaurants, clothing shops, jewellery shops, delis and wine shops. We ate a late lunch early dinner; pizza and wine then shopped at the supermercato. We were here for two days, three nights.

New Years Eve; Di and Andrew spent the day doing their own thing while Steve and I wandered around the city enjoying the sites and the shopping. We planned to eat in tonight and then go to St Marcs Square for the fireworks. The night was cold and getting colder. We left the apartment at 10.30pm and found a spot to watch the fireworks on one of the Gondola’s jetty’s. We were away from the crowd and huddled together for warmth. A young couple from Switzerland were also on the jetty and shared their champagne with us as the clock struck 12. The night was so cold we hung around for a while after the fireworks and let some of the crowd disperse. Then we made our way back home.

The next day the fogged rolled in and many of the ferries were cancelled. We waited until we could get a ferry to Burano and from there made our way to Murano. The day was bitterly cold and the fog rolled back in later in the afternoon. From Venice we caught the train to Florence. It rained all the way. We picked up our car and drove to the Siena countryside. Along the way the weather cleared. This time we were staying in a Agriturismo, Castel di Pugna which was in the grounds of a vineyard and olive grove. We found the local mercarto and brought groceries then drove on to our destination. Villa Cambi was at the end of a long avenue surrounded by beautiful pines. The house dates back to 1189. Dinner at home tonight, it had been a long journey from Venice to here. Tomorrow we would spend the day resting as Steve was not feeling well. The morning brought in fog and a cold snap. After breakfast we went for a walk around the grounds. The fog had lifted by mid morning and the day was beautiful. In our immediate vicinity we could see many villas of varying size and state. Some looked like they needed much repair while others were obviously lived in. In the distance we could see Sienna, our destination for tomorrow. We spoke to the owners and arranged to go wine tasting at 4pm. There was another couple staying in the Castle, so with the six of us, Giuseppe showed us around the Castle and its secret underground cellar. The original castle was destroyed by the Florentines in 1289 but the cellar was always there. At the end of a long walk down down into the dungeons we found a small prison cells. As is the case with most buildings in Italy there is a long history of war and destruction. We left the cellar and came back into the wine tasting room. Not only did they sell wine but they had a range of skin products. Before I left I would buy some face and body creme; always looking for something new and the smell was divine.

Next day we drove to Sienna. The walk from the carpark to the top of the city was Mt Vesuvius all over again. At times we walked backwards; was easier on the knees and hips. But when we came out at the top we could see why it is written this is the greatest city for shopping and surprises around every corner. The historic centre of Sienna is a World heritage Site and is famous for its art, museums, churches and the Palio, a horse race held twice a year in the city square. The following morning after eating breakfast in the castle we left for Cinque Terre. We were travelling via Pisa. Andrew and Di climb the tower while Steve and I walked around the beautiful grounds and visited the markets. As we had thought, the climb was quite scary being on an angle for the entire time. After visiting the church and taking the obligatory photo of holding up the tower, we left for Levanto. The road down to the coast was winding and steep. Di suffers from motion sickness so she sat in the front. By 5pm we had arrived at Villa Margerhita. Our last stop in Italy. After unpacking we walked into town to find a restaurant for dinner. The roads are narrow and treacherous. Steve fell in a drain whole and after bouncing off the small rock wall landed in the middle of the road in the path of a fortunately slow moving vehicle. Although hurting his ankle and his pride we continued into town, but with a healthy amount of caution. We only had one day here so the following morning Di and Andrew left early determined to get in as many of the famous Cinque Terre towns as possible. Steve and I had been here the previous year so we took our time. We visited Riomaggiore and Monterosso while Di and Andrew visited all five stops.

There is a huge difference in crowds and what you can see when visiting Italy in the winter. We were unanimous in our decision any future European trips would be done in the latter part of the year. No long lines, pictures of iconic buildings and statues sans people, accommodation virtually to yourself. We loved staying in apartments and doing our own thing; grocery shopping at the Supermercato and food markets.

We do know that from an ancestry searching point of view, Christmas is not the perfect time but we are sure late October or November would be fine.

In closing I must say that although I travelled with my husband, his sister and her husband, I also travelled with a great driver, our own personal chef and a professional photographer, but there was only the four of us. You may well ask, what did I do, I was the keeper of all papers, train tickets, accommodation vouchers, tourist destinations. I gave the history lessons as we entered a new city, iPads are a great source of information and I was the mediator in times of discourse, which of course there always is between siblings. But in truth we had a marvellous holiday, discovered new things about ourselves and discovered a family history seen through the DNA of not only my husband and his sister but of our children as well.

France awaits us, just around another corner and through many tunnels.

Our Italian Journey – The Final Leg