Our Italian Journey – The Final Leg 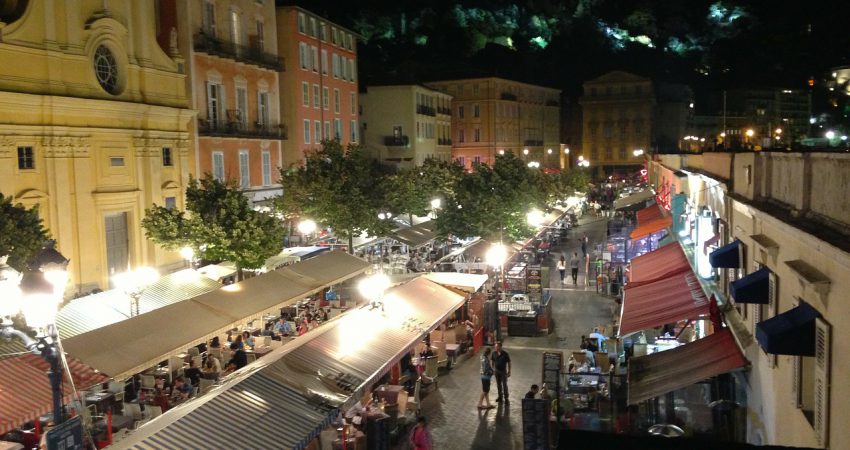 We left Italy behind and drove over the mountains and through tunnel after tunnel until we arrived in Monaco.

Monaco, land of fast cars, large boats and the richest of the rich. After parking the car at the marina we walked on to the jetties to check out the boats. Some had helicopters on their rear deck, some had chandeliers and still others had guards. If the boats and their sizes weren’t enough of an indication of the money in this Principality, then the cars parked near the boats were.

We had lunch and left for Nice. It was Friday afternoon and the traffic was a nightmare we longed to be out of. After much driving around in circles we finally found our hotel and the parking station. We stayed one night and next morning drove along the coast road visiting Cannes and Saint Raphael.

We left the coast at Saint Raphael and drove towards Verdon Gorge and a little village called Aups. Our hotel was the La Bastide du Calalou, a Chateau out of town, nestled at the foot of a steep hill. The ancient village of Moissac-Bellevue perched at the top. We spent the afternoon walking through the narrow lanes and taking in the panoramic views across the country.

Later that evening we drove back into Aups and had dinner at l’ Aiguiere Restaurant. The food was good and the owners spent much of the evening asking us questions about Australia and Rugby. We left there promising to review their restaurant on Trip Advisor.

Next morning we drove through the Verdon Gorge. A few times we ventured out of the car but we were high above the Gorge and it was freezing. From the edge of the road we could see the ice blue waters far below us. If you have read ‘The Clan of the Cave Bear’ series by Jean Auel you would recognize this area. Jondalar and Ayla spent much of their travels crossing these mountains.

From Verdon we drove south west towards Leizgnan-Corbieres in the Languedoc-Roussillon region. Again after much driving around we finally found the black door in the back streets, Maison Allene. From here we visited the ancient city of Minerve and medieval castle in Carcasonne. We also found the Wind Turbines at Carnet. Very exciting to be able to stand near them and listen as their blades whirred with the wind.

We left the beautiful Minervois Region and drove towards Sarlat-la-Caneda going via the Millau Bridge. This bridge has been featured on Megastructures; a viaduct 2.5klms long and 350mtrs high. We drove over and under and stopped for lunch at the information centre. Lunch was bread, cold meat, cheese and olives on the bonnet.

We arrived in Sarlat at 4.30pm, staying at the Manior Petit Meysset owned and operated by Suzette, an English lady who had lived in Australia for thirty years. Andrew and Di walked to the Carrefour and came back with dinner. Our rooms were beautiful; the beds warm and fluffy. After our long trip this was most welcome.

Next day we visited the Chateau Cazanac; the venue for our niece Miranda’s September 2013 wedding. We met Louise the wedding planner and she showed us around the grounds and inside of the Chateau. There were renovations in progress but the areas we saw were beautiful.

The Saturday markets were on in Sarlat so we left the Chateau and drove back into town. These markets are the biggest in the area and very popular. There was also the Foie Gras festival happening making the town very busy.

We arrived back at the Manoir late in the afternoon. Steve and Di walked to the Carrefour and picked up dinner. Tomorrow morning we were leaving for Limoges to catch the train into Paris.

Our trip was almost at an end, twenty-four days in Italy and nine in France. We were very fortunate to be coming back for a month in September, although plans for the month were still being discussed.

The train ride into Paris was uneventful. We arrived late in the afternoon and it was cold, very cold. We caught a cab to our hotel. The ride through the city was extremely difficult and took much longer than under normal circumstances. But Paris tonight was not normal. There were demonstrations all over the city; people were walking on the streets, the footpaths; roads were blocked people were carrying placards. The cab tried this way then that way, eventually driving under a plastic barricade to arrive outside our hotel the Elysses Union. The Eiffel Tower filled the night sky at the end of the laneway.

Next morning Steve and I bought tickets for the Batobus while Di and Andrew fitted in as much as they could in the few hours we had. The Batobus was a hop on hop off water taxi. We visited Notre dame, the Lourve and the Eiffel Tower. We know we will be back in September and the weather will be warmer. For now we were hay to take a fleeting look at what Paris had to offer.

Tonight we ate at the restaurant across the road from the hotel. Stephen ordered Chitterling sausages, I had chicken, Di and Andrew had steak. Most definitely chitterling sausages will be off the menu for our next France trip; if you want to know why; go to google. Needless to say we are now of the opinion, the French are not the degustation connoisseurs, they believe they are.

Left Paris early next morning amid a snow storm and arrived in Singapore the following evening to humidity, heat and rain. After two days of sightseeing and shopping in the heat and humidity we left Singapore late on the Friday evening to arrive home early Saturday morning.

We had travelled the length and breadth of Italy and Sicily, visited the homes of Steve and Dianne’s ancestors, climbed Mount Vesuvius, eaten and drunk like kings and queens and loved every minute.

We all decided we would come back to Italy sometime soon, but for now we had our September trip to plan and Di and Andrew had a wedding to organize.

Travel – to make a journey of some length – this had certainly been our plan.